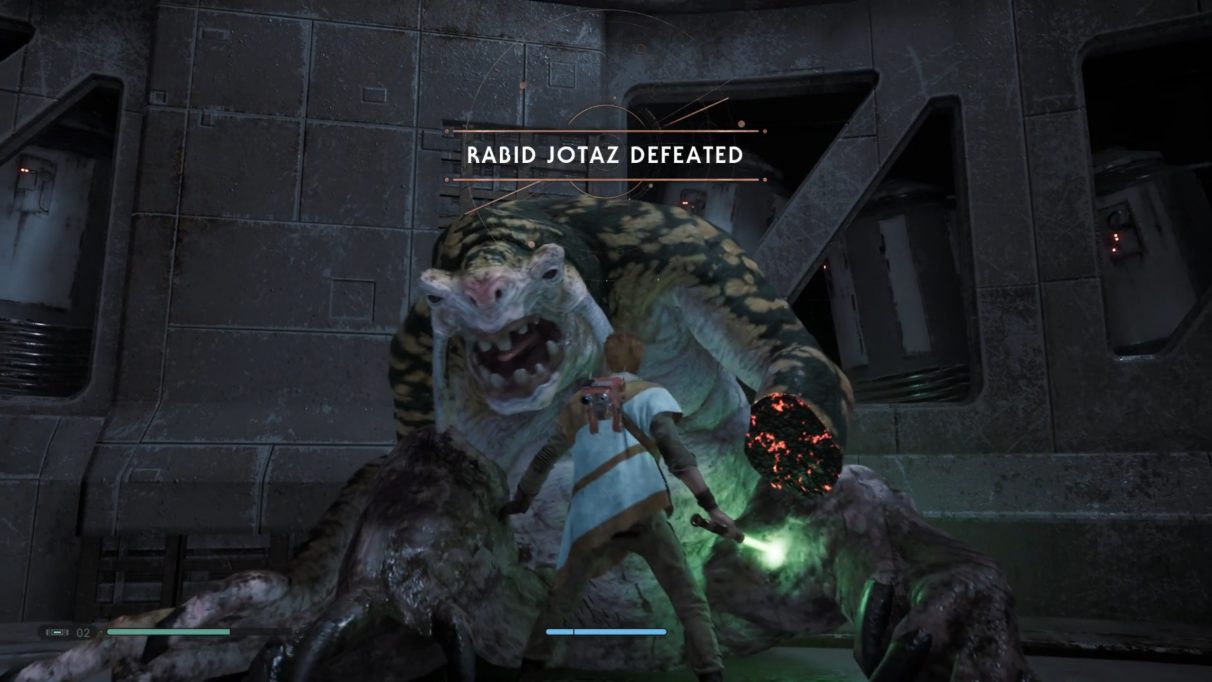 The Rabid Jotaz is one of the earliest optional boss fights you can come across in Star Wars Jedi: Fallen Order, and as a veteran of Sekiro and various Soulslikes, I can say that this guy is no joke. But follow our Star Wars Jedi: Fallen Order Rabid Jotaz boss fight guide and you’ll see that defeating this boss is not as insurmountable a task as you might first have thought. 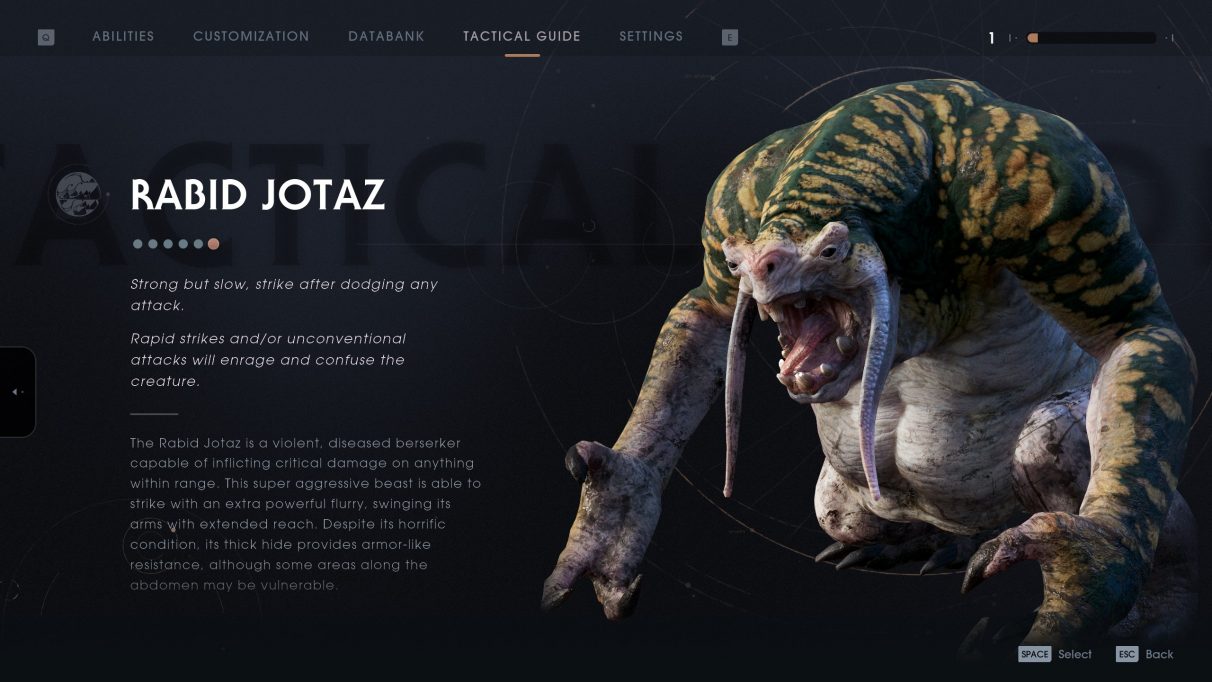 The Rabid Jotaz can be found on the planet Zeffo, which you’ll gain access to after your time on the first major planet, Bogano. You’ll need to head through the Ice Caves and into the Crash Site area – that’s the place with all the water and the swimming around – oh, and where the ruins of that great big crashed Star Destroyer is.

Let the Jotaz guide you. You’ll find one Jotaz in the centre of a circular area, surrounded by Scazz (Scazzes? Scazzi?). From there, hop up onto the rim and look around; you should see another little area with another Jotaz, separated from you by a short swim. Dispatch that Jotaz, then climb up the ledge and have BD-1 disable the forcefield using his Overcharge (if you don’t yet have this, you’ll need it before facing this boss).

Follow the path beyond the forcefield, and you’ll soon come to an arena where one Rabid Jotaz is patiently waiting.

Now, there is of course a way to make the Jedi: Fallen Order Rabid Jotaz boss fight much quicker, and that’s by lying in wait until the Rabid Jotaz is right beneath you, then leaping onto it and delivering a stealthy lightsaber attack that knocks away a good chunk of its health before the fight even begins.

But I’m not gonna do that, because I’m a Jedi (read: an honourable fool) – and besides, this boss isn’t so tough once you get to know him.

There are three main attacks to look out for, and they should all be fairly familiar as you’ll no doubt have faced plenty of Jotaz on your journey to this point. But I’ll go over each of them all the same.

The first is also the most dangerous: a three-step combo of massive swings. You’ll see that this attack messes me up slightly at the beginning of this fight, and the reason for this is that I was relying too much on attempting to deflect each of these attacks. The truth is that this is all risk, and little reward; these strikes are so powerful that if you get the timing wrong slightly and block instead of deflecting, then a single hit will almost entirely ruin your stamina. 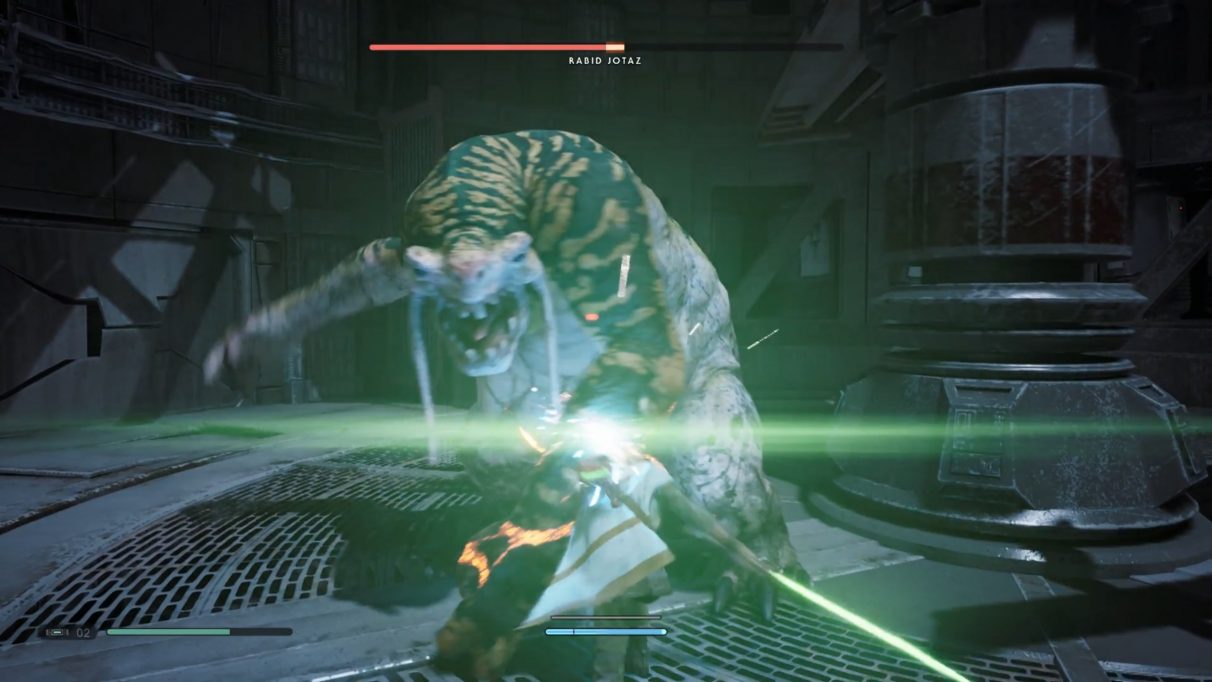 And even if you get the deflects right, this isn’t really a boss fight where stamina is the focus. Instead, much like Oggdo Bogdo, this boss is all about striking during the boss’s recovery phase. So for this attack combo, a combination of deflects and rolls is by far the best solution.

The second attack to watch out for is a simple one-step blockable attack, which is yet another swing of the arms, except this time it’s preceded by a short run-up, which gives this attack quite a bit more range than you might expect. But because it’s just one lone attack without any follow-up, this one is very easy to deflect, block, or evade without any trouble. 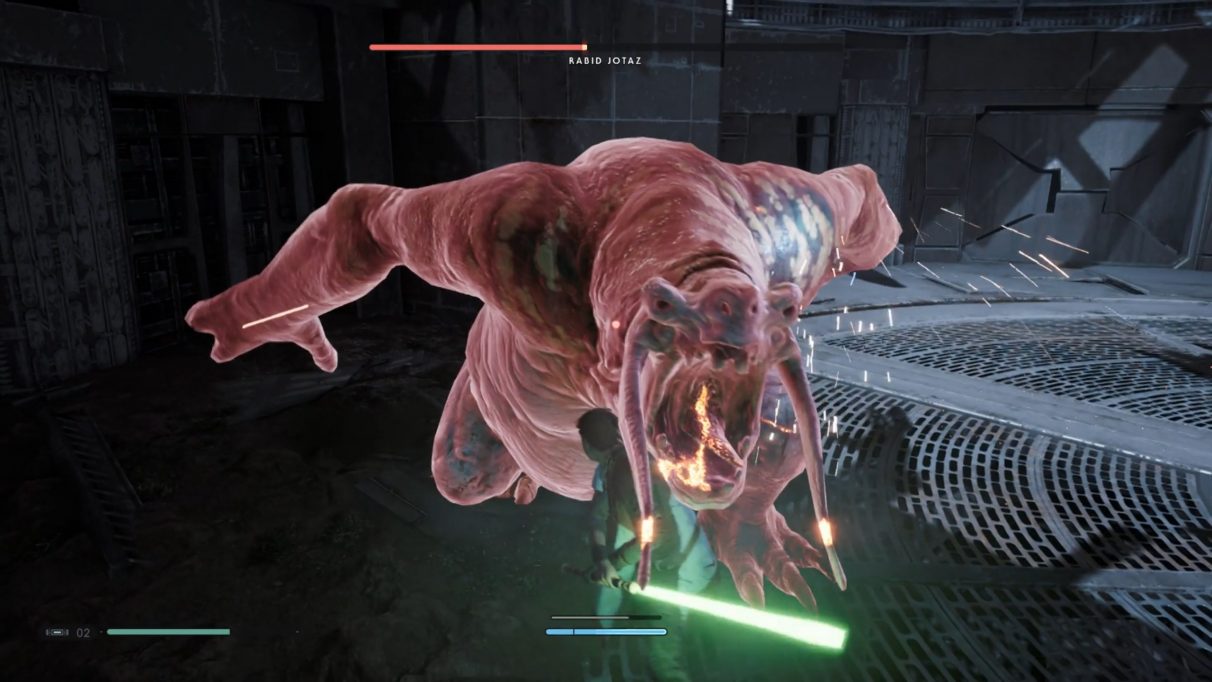 The third big attack to watch out for is the Rabid Jotaz’s unblockable attack, which is actually a two-part attack. Thankfully, the boss will telegraph this attack ahead of time not only with its red highlight (to signal an unblockable), but also with a big roar. Then it will dart forward (that’s the first attack) before slamming its arms down on the ground (that’s the second attack). Fairly easy to avoid; just roll to the side towards the end of the roar, and you’ll be in the clear and ready to capitalise on the Rabid Jotaz’s missed attack with some powerful strikes of your own.

All in all, just like the Oggdo Bogdo, the Rabid Jotaz is a bit of a glass cannon, with some powerful attacks but not much health at all. It’ll only take 20 regular lightsaber swings to defeat this titanic predator, so just stay on the move, rely less on deflects than on rolling to evade its massive strikes, and watch out for the telltale roar that precedes its unblockable attack. Remember all that, and you’ll find this boss is no match for a true Jedi. 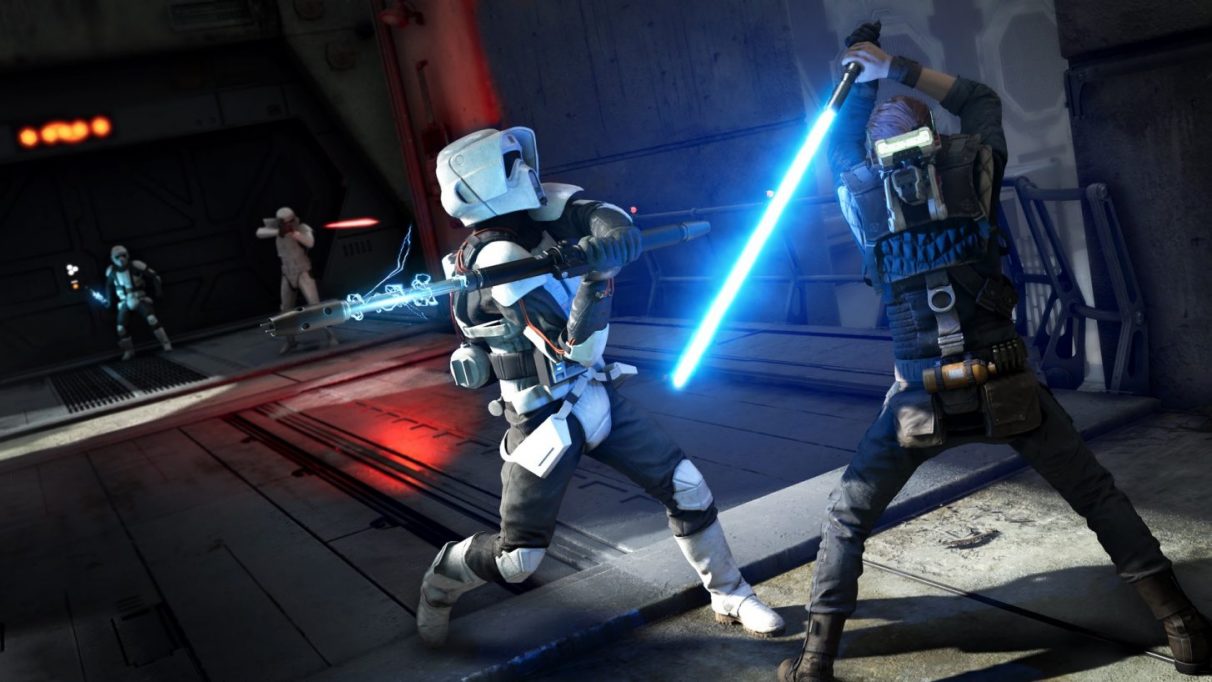 So that’s pretty much all you need to know in order to defeat the deadly Rabid Jotaz. But that’s not all we have on Jedi: Fallen Order, not by a long shot. Whether you’re after tips on another boss, or you’re looking to understand another aspect of this extensive game, be sure to check out our guide series below.