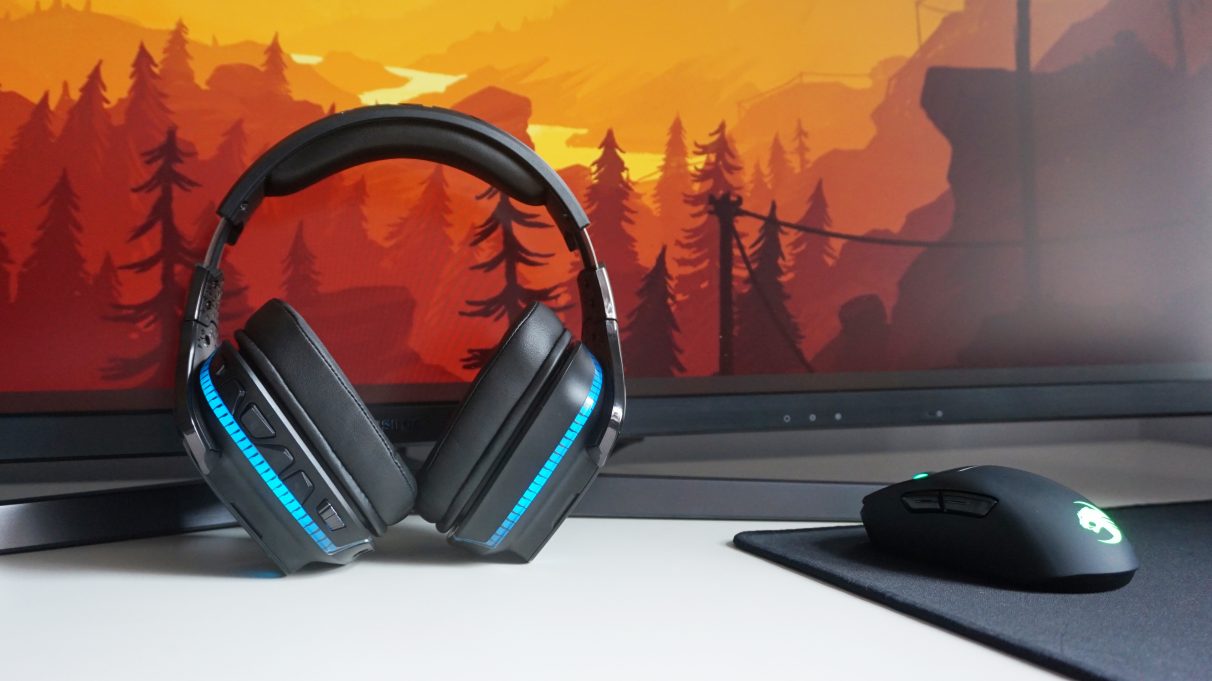 Logitech’s G935 headset is quite possibly the most powerful gaming headset of all time. It’s so mighty, in fact, that I was able to push my keyboard to one side after I’d set it up, as its three rear-facing function buttons gave me all the tools I needed to control my entire PC from it. Okay, that’s maybe a slight exaggeration, but when said buttons can do everything from launching my favourite games, Alt-Tab-ing between different apps, perform macro commands, copy and paste and even change my mouse’s DPI speed, this is one gaming headset that really does feel like you’re ‘playing with power’.

There are, of course, practicality issues that come from using the G935 like this. Indeed, once the headset’s firmly nestled against your cheeks, it’s pretty damn hard to distinguish which of its buttons are which – especially when its On / Off switch sits above its three G buttons, and its small, similarly-sized microphone mute button and volume wheel are directly below them. That’s six different controls you’ve got to blindly fumble about with once it’s on your head, and it was only by careful and considered prodding and poking that I was able to work out which button was suddenly going to launch Hitman 2, and which one would let me Alt-Tab out of the game I was already in.

Still, other functions such as copy and pasting, opening search, skipping music tracks or locking the desktop worked brilliantly once I’d finished playing musical chairs, as did the G935’s more specific ‘Action’ commands like muting myself in Discord or toggling the record button in OBS. That’s just the tip of the iceberg, too, as you can also assign individual keyboard buttons to them, adjust the microphone’s sidetone levels, change the headset’s bass and treble values and loads more.

Yes, many of its functions aren’t remotely practical in the grand scheme of things, but despite some of the obvious novelty factor hidden away inside this trio of buttons, there’s no denying they give it a stupid amount of versatility in the process. Indeed, hand one button over to Logitech’s G-Shift function, and the other two buttons can pull double duties, giving you a total of four commands overall. That’s not something to be sniffed at if you have trouble remembering specific keyboard shortcuts (I’m perpetually forgetting which buttons lock my desktop, for example), and especially so if your mouse and keyboard don’t offer any additional functionality like this either.

Of course, all that extra flexibility would be worthless if the headset itself was a complete dud, but thankfully the G935 is up there with the very best gaming headsets I’ve ever tested. In truth, there’s not a huge amount separating it from Logitech’s slightly older G933 Artemis Spectrum headset, which is good news if your G933 is on its way out and you want a like for like replacement, but less so if you were hoping for something a bit fancier and more refined. The G935 has larger 50mm drivers and a newer version of DTS’s Headphone X 2.0 tech for its virtual 7.1 surround sound, for example, but otherwise you’re looking at pretty much exactly the same design (which in turn means the same amount of grubby fingerprint marks to clean off its glossy plastic frame), the same kind of battery life (12 hours with no LED lighting, and 8 hours on its default lighting settings), and the same 2.4GHz wireless range of 15m.

Still, while its battery life is a bit on the low side (especially compared to the stonking 100 hours of the Sennheiser GSP 370, a review of which will be coming soon), the G935 is still a damn fine ear buster. In Doom, for example, everything sounded pitch perfect. My Super Shotgun delivered an immensely pleasing BOOM with each click of my mouse, but it never overpowered the game’s surrounding demon cries or its pumping battle music, allowing me to pinpoint any last remaining stragglers with pinpoint accuracy while enjoying all the rich guitar detail in its accompanying soundtrack. 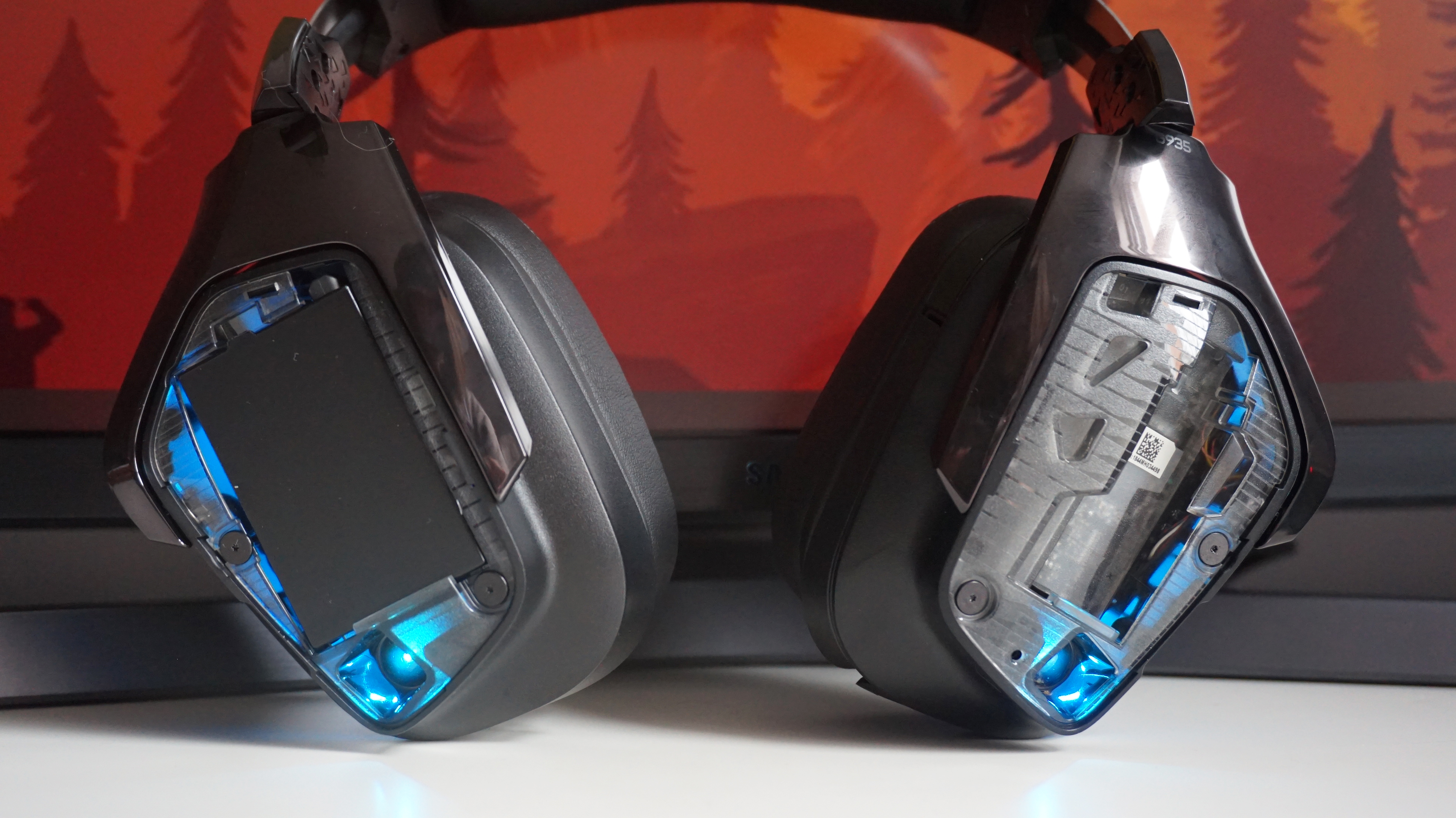 Both of the G935’s ear cup covers can be removed for easy access to its rechargeable battery and to store its USB wireless dongle.

Hellblade: Senua’s Sacrifice was similarly atmospheric. The G935 did a fantastic job with its binaural audio, producing crystal clear voices that felt like they were whispering and snickering inside my head just like they were in Senua’s, and there were even moments when the natural warmth of the main narrator’s voice sent a small shiver down my spine.

The orchestral music in Final Fantasy XV sounded brilliant as well, with the G935 balancing its zippy zappy battle effects against its detailed, busy battle music perfectly. Nothing ever felt like it was overwhelming anything else, and it meant I was able to just kick back and enjoy the game without having to fiddle about with its settings all the time. 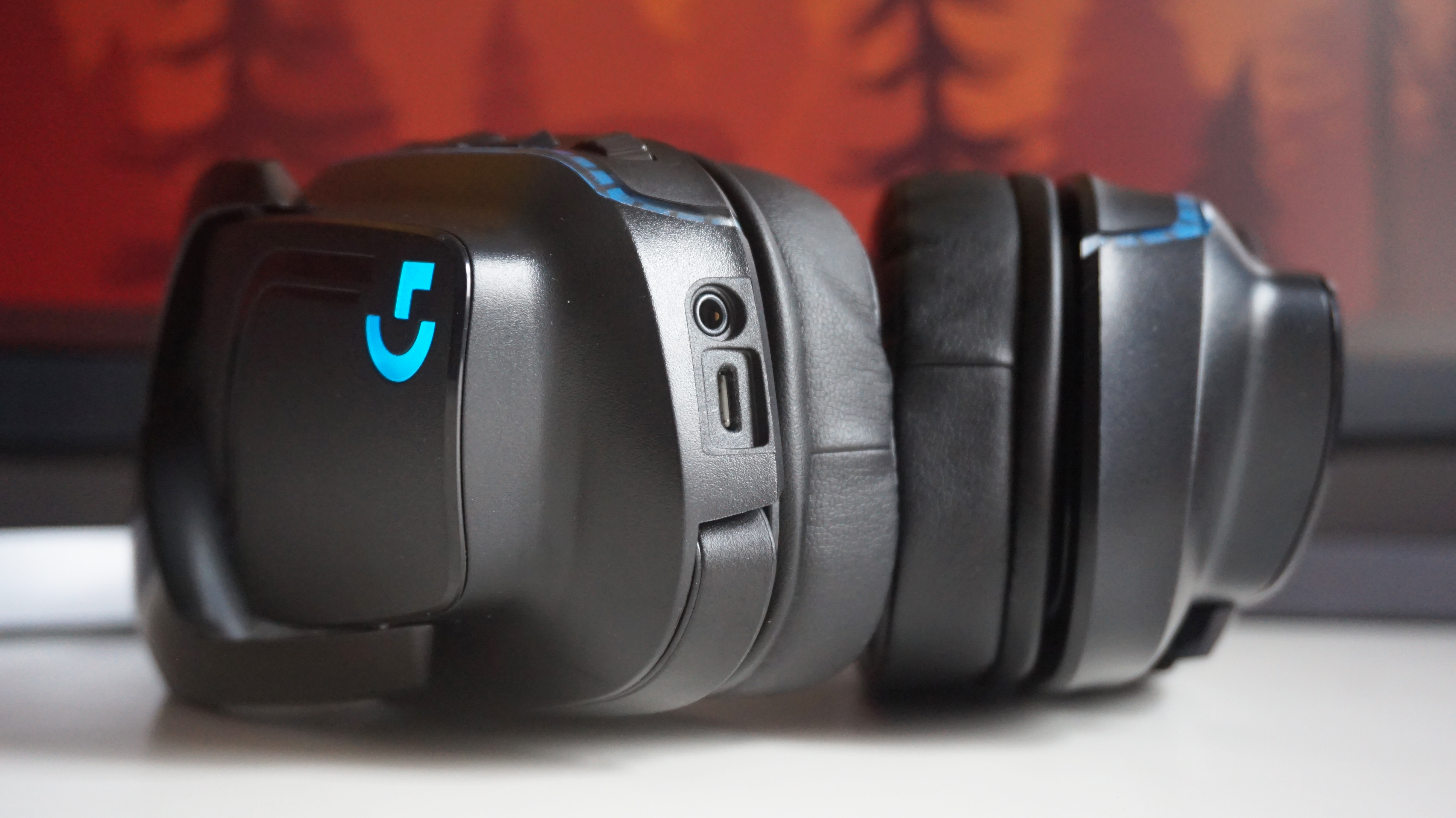 You can carry on using the G935 while it’s charging with its microUSB cable, or plug in its bundled 3.5mm audio jack to use it with consoles and phones.

Surround sound aside, though, I was also impressed with the G935’s flip-down microphone. Unlike other flippy headset mics, this one actually disappears into the main body of the ear cup so you could, in theory, venture out into the public eye with the G935 without looking completely daft. Personally, I think it’s still a bit too obvious part of the Gamer Design School for complete unashamed use out and about (especially if you’re using its bundled 3.5mm audio cable to use them with your Switch or phone etc), but others may feel differently.

Either way, the mic itself is pretty great. Not as good as the mic on Logitech’s G Pro X, mind, as my voice still sounded a tad artificial when I recorded myself talking in Audacity, but there wasn’t a hint of any background hiss, nor did it pick up any breathy wind pop effects (despite my best efforts). Instead, everything was lovely and clear. It also beeps and has a visible red LED on the end of it to let you know when you’ve hit the mute button correctly, which is always handy when you need to take an emergency tea slurp without anyone noticing.

It was also surprising comfortable to wear for long periods of time, too. There were moments when I thought it was about to descend into a medieval-style head vice, but once I’d adjusted it slightly, it proceeded to be perfectly fine for another couple of hours. Again, the Logitech G Pro X is still king when it comes to overall comfort, but the G935 was definitely a lot better than I was expecting. 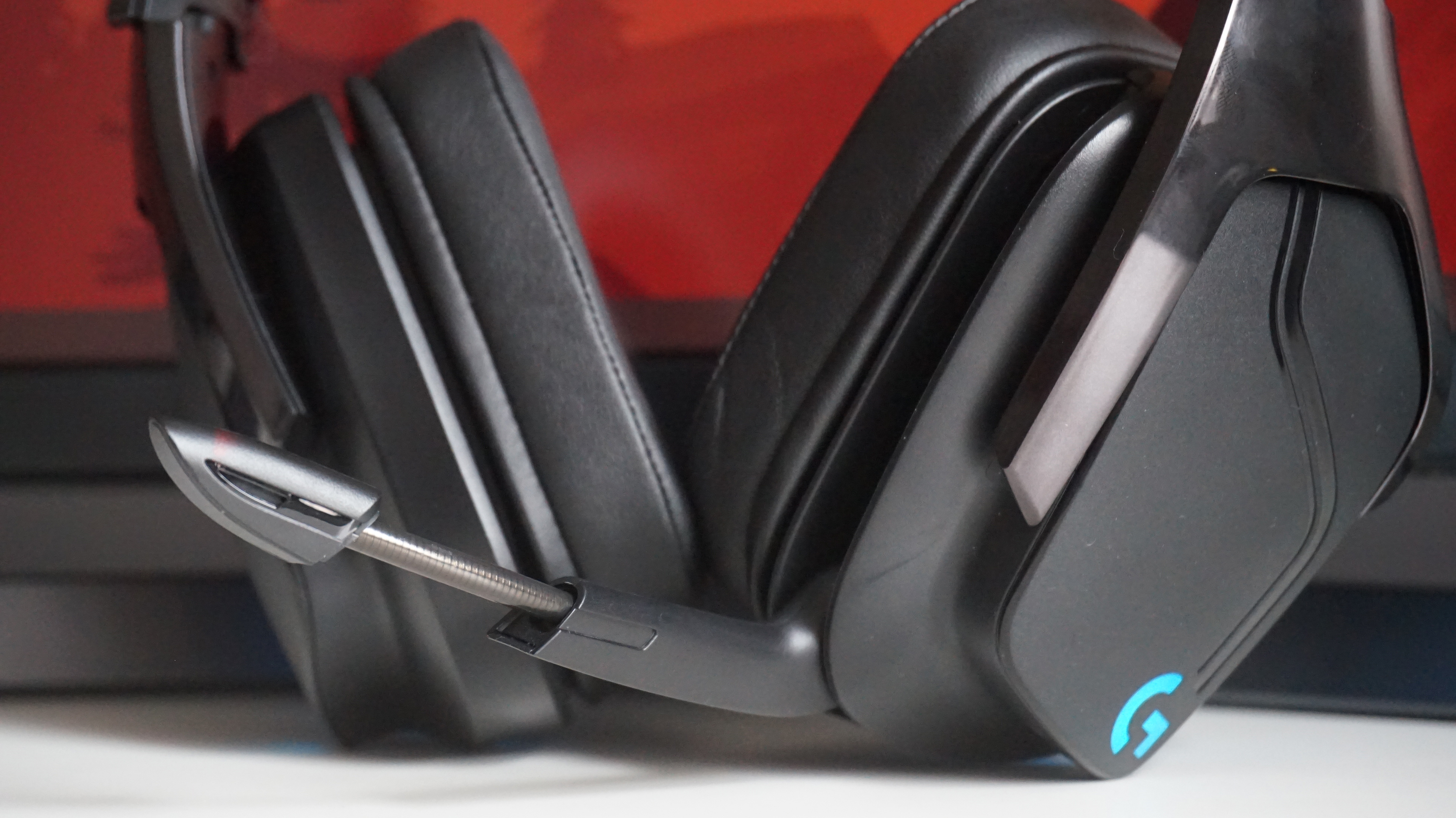 The only real problem is the G935’s price. At £135 in the UK at time of writing, it’s more expensive than the £110 Logitech G Pro X right now, which just seems barmy when the Pro X not only looks better than the G935, but also sounds better and comes with a superior mic and comfier headband. The G Pro X is wired, sure, and doesn’t have those all-important function buttons, but for me, there’s nothing more important than a headset’s overall comfort levels, which the G Pro X wins hands down (although I must admit there’s still a part of me that wishes the G Pro X offered the same kind of feature set as its G935 sibling).

Then, of course, there’s the excellent Steelseries Arctis 7 to consider, which is still my favourite wireless gaming headset in my best gaming headset rankings. I reckon the G935 has the edge on overall sound quality here, but when the Arctis is infinitely more comfortable and has double the battery life, it’s a much more compelling buy at £119 right now.

The G935 is a mildly easier sell in the US, where it’s currently a more palatable $100 compared to the G Pro X’s $130 and Arctis 7’s $113 asking prices, but even so I think I’d probably still rather pay the extra for that comfier, longer-lasting Arctis.

Of course, all this may change come Black Friday, where the G935 is much more likely to be discounted than its G Pro X sibling, so if it’s available for a decent price compared to the Arctis 7 then it’s probably well worth considering (and I will, of course, be scouting out all the Best Black Friday headset deals myself over the next week and a half so you don’t have to). For now, though, the Logitech G935 is still an excellent wireless gaming headset in its own right, and a worthy rival to the Arctis 7’s crown.